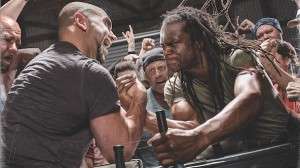 Well if you have not watched Game of Arms yet then I suggest you give it a look. I really feel this show is going to open up the world of arm wrestling to the main stream. Is that something we want? I would imagine many people have different takes on it, but I think it will be a positive overall.

What Is Game Of Arms?

In a nutshell… the show is a look into the tough and very competitive world of arm wrestling in the USA.  What happens is the series follows members of five different clubs. They come from Baton Rouge, LA, Sacremento, CA, New York, NY, Kansas City, KS, and Eria, PA.

They do backgrounds on most of the guys and it is pretty cool to hear the stories and see the real history of arm wrestling. Guys age in rank from their 20’s to their 50’s. The old dudes are tough, but you can tell some are starting to show their ages, while other guys just plow through people like it’s nothing.

The best part is the trash talking and the history of certain rivals that have been going on for years. When they get to the table it is time to settle! It gets pretty intense and I am surprised more fights do not break out. You can tell some guys respect the sport more then others, but at the end of the day most seem to show respect whether they win or lose.

I hope to really dig deep and get a full cast bio going, but for now here is the basic info of the teams. We will also be creating a page for profiles of other top arm wrestlers as well.