Thanks for stopping by! At Arm Wrestling Word we are trying to put together great resources for any interested in learning about this sport or getting better at it. From training, to tips, to interviews with the pros stay tuned for some great information as we get this site going. For now learn a bit more about this sport below.

Arm wrestling is a high impact sport believe it or not and puts a ton of torque and pressure on each persons arm and body. Each participant in the arm wrestling match places either the right or the left arm on a flat surface and each participant’s elbow is bent, while touching the surface. With the two hands strategically aligned, each person has to grip the other person’s hand and pin it on the surface. The winner in an arm wrestling match is the person who pins the arm of the other first and the person whose hand is pinned loses the match.

Many factors play a role in determining how successful one can be in arm wrestling. The overall techniques used by the players along with the overall arm strength are two of the most crucial factors that contribute to one’s winning. However, there are other factors such as the wrestler’s arm length, reaction time and others that also determine the success of one arm wrestler over the other. 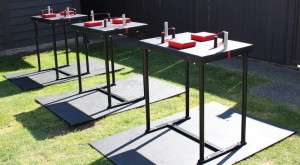 Professional arm wrestling matches take place in the form of a tournament and matches are divided into right hand and left hand divisions. Arm wrestling is universally governed by The World Armwrestling Federation and according to reports, 85 countries are active members of WAF.